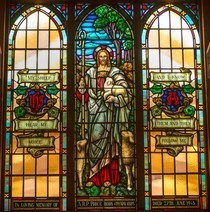 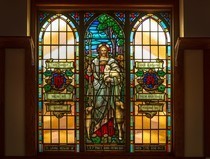 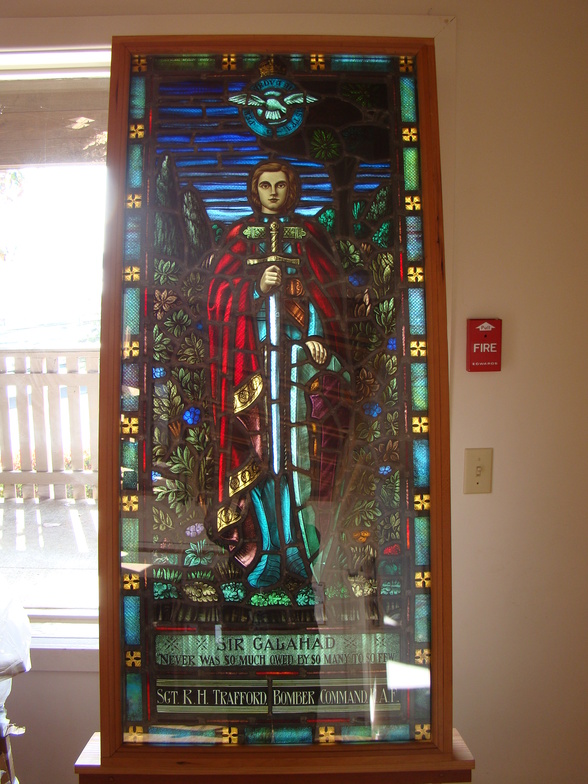 The stained glass windows in All Saints by-the-Sea.

2009 St. Cecilia Window donation:
Window was donated to us by Barnaby Guthrie to commemorate Caroline Hamilton, the artist who designed it.

The window was made from European hand-made glass in 1978 by Robert Wise, a professional stained-glass window-maker in Victoria, BC. Caroline's "cartoon" also included her positioning of the glass cuts which Mr. Wise believed was expertly done and needed little adjustment in his manufacturing process. The window lived in a north wall of Barnaby's wood home in East Sooke from 1978-1996. When he moved from that house, he had the window extracted and placed into a 1 3/4" hardwood frame and supported by two transverse "legs" that stick out back and front to keep the window upright and free-standing. If the window was to be placed into a wall, the frame could be easily removed with the wood thickness deducted accordingly. The colours are a good deal more vibrant when lit by a good, strong, natural light.

In December 2009, Barnaby moved to another home on Salt Spring Island and was looking for a final resting place for the window in a religious setting. His mother, Nonie Guthrie, and Caroline were well known in the All Saints' Church community. Nonie's funeral was held at All Saints in August 2005.

Cecilia, also known as Saint Cecilia (~200-230 AD), is the patroness of musicians. It is written  that as the musicians played at her wedding she "sang in her heart to the Lord". Her feast day is celebrated on November 22. While the details of her story are apparently fictional, her existence and martyrdom are considered a historical fact. She is said to have been beheaded with a sword. An early church, Santa Cecilia, was founded in the 3rd century by Pope Urban I in the Trastevere section of Rome, reputedly on the site of the house in which she lived. A number of musical compositions are dedicated to her, and her feast day has become the occasion for concerts and musical festivals.